Indirect Co2 Fire Detection Tube is filled with 42kg Co2 . This type of extinguishing device can automatically put out fire. When fire burns detecting tube or ambient temperature rises, it will make the tube broken. Then the agent in cylinder will be discharged through pipe.

This kind of system is fit for small spaces , like the power plants , communications , radio , film and television , petrochemical , railway system and so on.

This extinguishing device needs no electrical elements and pipe fittings to consist of a system. It can be a fire suppression system itself. 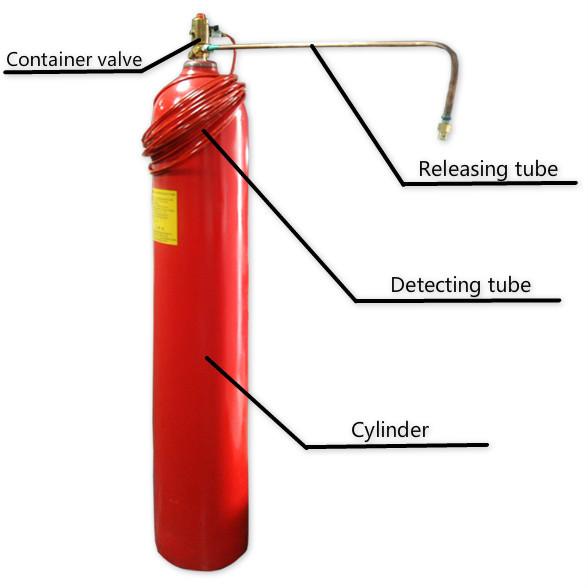 1 / Convenient installation and transportation. Because this system combines fire fighting and alarm function together, and no needs to match electrical elements and pipe fittings, so after fixing the cylinder on a place, all left to do is fixing the detecting tube around a potential source of fire.

2 / Non-electric start mode. It doesn’t need the power to activate the system. This system’s work principle is using its own storage pressure instead of relying on the outside force activating. When the detecting tube is broken by the fire, the agent will discharge.

3 / Little occupation of space. This system is suitable for protecting a system, like telecommunication system, rather than a protected zone. The cylinder fixes on the outer cabinet, and will not occupy many places.

The company's office and factory are not seperated. These two contain in the same buiding and the first floor is for factory use, the second floor for office use. We here has estabilished a professional project design team and an excellent install and after-sale service team. Our good service and best quality have won a lot of good feedbacks from customers, but we still keep improving our technique trying to innovate more new fire fighting products.

Since established in 2000, the company has won a lot of praise and honors. The title "AA level credit company" was given to us by China Fire Protection Association in 2014. Besides, all our products pass the CCC test that means the quality has been regconized.

The main products of our company is the fm200 series, at the same time we also sale other fire fighting equipment, such as the anti-poison respirator, fire resistance rolling shutter and so on.

Our target customers are those people who require fire fighting equipments all over the world. We have quickly developed the asian and african market until this year. In the following years, we will strive for other foreign markets.

We are ready for challenges, so please do not hesitate to send an inquiry to us!

Send your message to this supplier
You May Like
Find Similar Products By Category:
Firefighting Equipment
Hot Searches:
Inquiry Cart 0
Contact Us
Inquiry Cart
Back To Top

Thank you! Your message has been sent to the following suppliers.